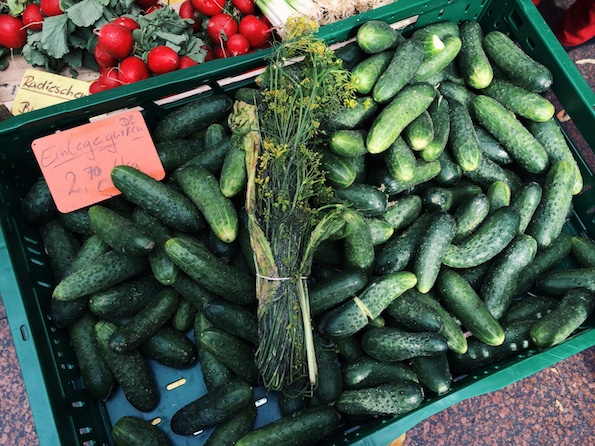 One of the prettiest sounding trades I ever got was by a the little boy Noah, 5 years old. He traded what he calls “Happiness in a Jar”; pickeled cucumber. I totally know what he means with that. Personally I am addicted to sour polish cucumbers.

In the Bread Exchange book there is a whole chapter dedicated to sour polish soups. I really d not know anything better for the winter season.  Some of the recipes in The Bread Exchange book require pickled cucumbers, so we thought we would share a recipe with you so that you can make your own ‘jar of happiness’ in preparation for making and sharing some of the meals included in the book. These recipes would not work with the German or Swedish style of pickeled cucumber so if you do not have a good Polish delicacy around the corner it might be good to make your own.

It is almost last minute to get the cucumbers now but in Berlin and Spreewald you could still get them this week. Depending on where you are in the world you might be able to get some small cucumbers still.

This recipe is courtesy of From a Polish Country House Kitchen: 90 Recipes for the Ultimate Comfort Food by Anne Applebaum and Danielle Crittende. Anne Applebaum is one of the contributors of the Warsaw chapter of the book, to this recipe for dill pickles is the perfect complement.

These have just a whiff of sweetness. But if you don’t like any sweetness at all, you can simply omit the sugar, bearing in mind that the pickles will not be considered “in the Warsaw style.”

Put two wide-mouth 1-qt/960 ml canning jars in a pot of boiling water to sterilize them. (You can also run them through the dishwasher.) Let cool.

Divide the cucumbers between the jars. In each jar place 2 pieces of the horseradish root, 1 bay leaf, 5 allspice berries, 1/4 cup plus 2 tbsp/85 g sugar, 1 cup/240 ml white wine vinegar, and 1/2 tsp salt. Divide the dill flower in half and place a half in each jar. Fill the jars up to the top with water, wipe the rims, and seal tightly.

Place both jars in a large soup or pasta pot, and fill the pot with water, so that it covers about seven-eighths of each jar. The jar lids should not be submerged underwater. Bring the water to the boil, and continue boiling for 10 minutes.

Remove the jars from the pot, cool, and store somewhere dark, such as a cupboard or cellar.

These pickles will be ready to eat after 3 months, and will last for 1 year or more (As long as you make sure to use really clean cucumbers!)

Variation: Add about 10 peeled garlic cloves to each jar (with or without the sugar), for a delicious garlicky pickle.

Behind the book scenes

I think I have mentioned it before, but I never really had the idea to write a book about the...