I found Kheiras drawings on record covers of music that I liked on, hm, MySpace. It must have been 2006 and I was in Sweden to write my master thesis and tracks from Lars Kranholdt, or “This mess is mine”, was running warm on repeat. I wrote to her, she was German living in Berlin, and we ended up meeting. By now we swapped heimat - I am back in Berlin and Kheira moved to Stockholm.

Kheira is probably my first social-media-friend. And example of how your appreciation of someones work online can lead to a connection in real life; completely based on a mutual interest for how the other person sees and presents the world.

When I started working on my book I knew I wanted something by Kheira in there. I offered my apartment in exchange for a drawing since I knew she loves to come back to Berlin from time to time. We had many nice discussion on what she could do, and in the end we decided that she would draw the journey of The Bread Exchange as a World Map in the book (I LOVE maps – and I love this map!).

Still, I’d really like to share with you the second drawing that she offered to trade with me to use in the book which is just as capturing. It is an image of my riding trip in the Sinai desert with the mountains rising in the horizon. 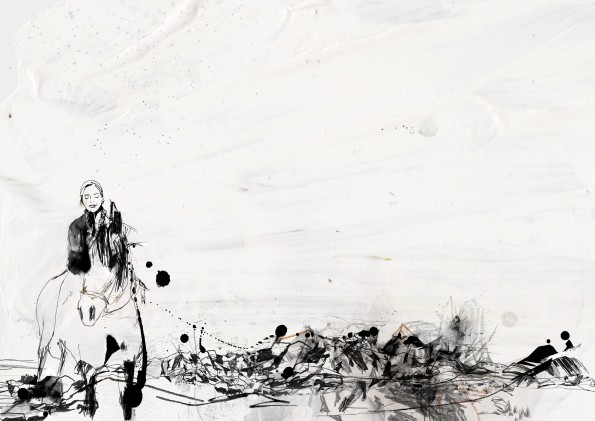 M: Where do you come from and what do you miss the most about this place?

K: I was born and grew up in Freiburg im Breisgau, a picturesque city in the south-west of Germany. It’s a “eco-city”, spoiled by the sun, known for its high standard of living, surrounded by a wine-growing region and the fairytale-like Schwarzwald (black forest). I definitely miss the nature. The smell of the dark pines and fir trees, the small almost turquoise lakes, the sound of the forest streams and waterfalls. And the mountains. On a clear day you can see the Alps from there!

M: What role does aesthetics play in your life?

K: A very (sometimes too) big one. I can almost feel sick by the ‘wrong’ color combination or personally offended by both actions and products done unambitious. But I also can get interested in everything, really everything if I can see that someone put their heart in it. I like things with a story behind them. Actually I think I like the stories even better than the things. I sort my clothes color wise, I bind my books when I do not like the cover (before I would not buy them but fortunately I too become wiser). To see all the colors and shapes at a farmers market makes me so satisfied that I often forget to buy something at all. I’m a visual, haptic and sensitive person. I like to touch and to smell things. To study and observe. Structures. Textiles. Light. Shadows. Materials. Colors. I want the things I’m surrounded by to be harmonic and at the same time interesting. Not perfect. But well done. I recently noticed that the older I get the more significant gets quality instead of aesthetics. And Simplicity. Time. And timelessness.

M: You left your native Germany for Sweden. What has been your biggest lesson?

K: I learned that how I sense the world, my life, life in general, other people does not so much depend on where I am and how things are going but on my inner attitude, my thoughts. Thoughts become reality. And: Home is a feeling inside.

M: If you could teach a group of people one thing, what would that be?

K: Daydreaming, imagination!! And when you’re good at it, stand up and stand out for what you believe in and do what you love the most wholehearted! Dare to be happy!

M: Where would you go for a late night swim in Stockholm?

K: So far I have only been to Långholmen, Årstaviken and Nacka, where I live. Almost too short and too halfhearted to mention. To be honest I love the sea when it’s light but I’m really afraid of it when it’s dark. Probably because of an encounter of the creepy kind with a water snake in an north italian lake when I was a child. A friend recently told me about a phenomenon known as ‘milky seas’. I looked it up and liked it so I decided to give it a serious – wholehearted – try again. But until then I’ll prefer day time swimming on one of the islands of the Stockholm archipelago.

M: If you could share one favorite album, what would that be?

K: One of the records I can listen to whatever mood I’m in and never get tired of is Philharmonics by Agnes Obel.

M: Where can I see your work?

K: You can find more of my work on www.kheiralinder.com from where you also will find your way to my tumblr with collaborations, past exhibitions, work in progress and archived projects.

You are interested in the wallpapers I have designed? Please go to http://www.yourwallpaper.se/en/papers/kheira-linder/. If you don’t want to miss the artist prints and other products I will start to sell later this year I recommend to follow on www.facebook.com/meedchenmeedchen or http://instagram.com/kheiralinder.

If you are living in or in the near future planning to visit Stockholm I warmly recommend to stop by a lovely place on Södermalm called ‘Falafelbaren’ to eat some of their delicious food and see the illustrations I did for them – including a window painting (that I will work in the next few weeks)! And something I’m really excited about already: In 2015 some creepy paintings and sketches I recently worked on will appear in some of the episodes of a new Scandinavian crime TV show called ’100 Code’ and I did a visual diary for the female main character of the new movie by Andreas Öhman called ‘Odödliga’.

BOOK CONTRIBUTOR – NICOLE SALAZAR, NEW YORK Nicole reached out to me to trade a bread when she was visiting...