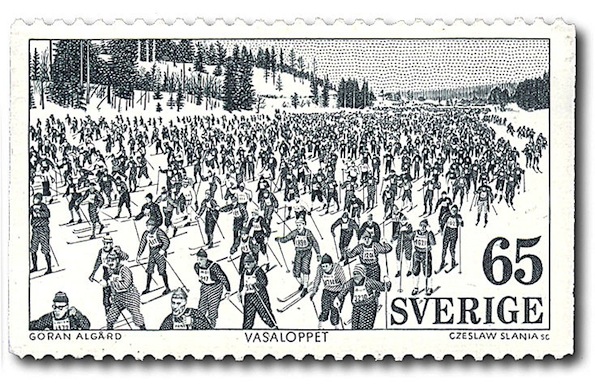 In 1521, when Sweden during a short period was ruled by Danes, a young Swedish man named Gustav Vasa tried to motivate people to fight for the Swedish Kingdom and kick out the Danish king, known under the name Kristian Tyrann.

Gustav had no troops so he went up to  the north part of Sweden (read middle) called Dalarna since the farmers there were known for being stubborn but loyal and, most important; strong (they still have a successful icehockey team in the region, Leksand). On a pair of skies, hunted by Danish soldiers, Gustav travelled through the snow about 90km.

You can imagine the rest of the story; of course the guys he met first said NO WAY! and then changed their mind to YES! and then they all went south and took Sweden back and kicked out the Danes.

The weather condition could not have been worse. + Degrees and water in the tracks. Dad, an engineer, was obviously well prepared and  had in advance been studying the various waxing technics hard (did you know that the best selling book in Norway this year is about Waxing technics?).

The whole thing made me a bit nervous.  I send him messages reminding him that he is already winner after 10 months of heavy practicing and that he should not be ashamed if he felt like giving up. But he made it through. Under 12 hours. I am impressed. Cross Country Skiing is hard stuff. 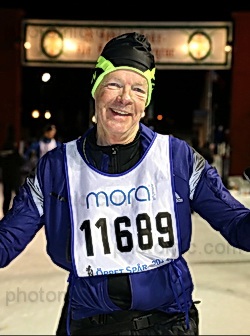 My first question was of course “what will you be eating?”.

No fancy energy drinks or power bars. My dad brought a plastic bag of Crisp Bread with him on a 12 hour journey. Respect.

You will see more of my Dad in my book. He is an inspiring person and has been participating too.

Crisp bread is supposed to be the most loved bread in Sweden. And it is probably the most Swedish bread. I have friends that do not eat any other bread. I love it too, even though I would not agree with the slogan that “Knäckebröd goes with everything”. It is not very suitable for soaking up sauces, soups and dressings. So it is def not for every occasion.

However, it is good.

And really really easy to make. So I asked my friend Johanna Paues Darlington, who was co-writing the cook book “Knäckebröd” together with Olof Jönsson (which she traded with me the first time we met), if I could share with you their basic Sourdough Crisp Bread. She said yes.

Mix everything together and let rest for one hour. Roll out the dough really really thin (this is the only tricky part in making crisp bread). You can use a pasta machine if you have one.

Cut the dough into pieces in a form you like, for example triangles. Or sticks.

Make tiny holes with a fork. Brush with water before you decorate with flaky sea salt and your favorite seeds (I like flax seed, but it is a bad idea for long distance crosscountry skiing.)

Bake at 275 degrees C until the bread gets color. Keep an eye since it goes super quick.

4 Comments on “Food for Champions”

Yesterday there was a really nice article about Trading in Berlin on  DEUTSCHE WELLE. It is nice to see that...